Skink – No Surrender by Carl Hiaasen 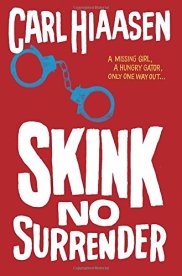 Skink – No Surrender by Carl Hiaasen

About: 14 year old Richard lives in Florida with his mom and somewhat clueless stepdad. His best friend is his cousin, Malley, who has a habit of making very poor choices.  Malley’s parents decide to send her to a prep school up north. Malley doesn’t want to go so she runs away with a “poet” she met on-line. (I told you she made poor choices…). Richard has a gut feeling something is wrong but he has no idea how to find Malley – until he meets a homeless dude on the beach named Skink.  Skink is a former Governor of Florida who faked his own death and now lives in the wilds of Florida – protecting the environment. Richard and Skink go on a crazy road trip into the boonies of Florida to rescue Malley from her kidnapper. After you read this book, you will never, ever, throw litter out of your car window and you may decide that eating road kill is not so bad after all.

Roben’s thoughts – Carl Hiaasen writes crazy, funny books.  Maybe you read Hoot? Remember the alligators in the port-a-potties?  Yep. Crazy and funny. But Skink – Skink is why I LOVED this book. He is one of the most amazing literary characters I have ever encountered.  He’s a super survivor, goes out of his way to stick up for the underdog, and is willing to do just about anything for the few people he calls friend. We all need a Skink in our lives at some point in time.

I think anyone 7th grade and up should enjoy this book. It starts out a bit slow but once Richard meets up with Skink and they head out on their road trip – you’ll have a hard time putting it down. It’s got a little bit of mystery (how did Skink lose his eye?) and a lot of crazy adventure.