A Tyranny of Petticoats: 15 Stories of Belles, Bank Robbers and Other Badass Girls edited by Jessica Spotwood

Posted on August 30, 2016 by Audviral, Mistress of the Stacks 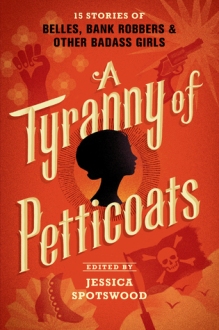 A Tyranny of Petticoats: 15 Stories of Belles, Bank Robbers and Other Badass Girls edited by Jessica Spotwood

ABOUT: “Crisscross America – on dogsleds and ships, stagecoaches and trains – from pirates ships off the Carolinas to the peace, love, and protests of 1960s Chicago. Join fifteen of the most talented writers working in young adult literature today – an impressive sisterhood that includes Elizabeth Wein, Marie Lu, Marissa Meyer, and Kekla Magoon – on a thrill ride through history with American girls driving their own stories.

They are monsters and mediums, bank robbers and barkeeps, screenwriters and schoolteachers, heiresses and hobos.  They’re charting their own path in often-hostile lands, using every weapon in their arsenal, reckoning with murderers and marriage proposals.  Along the way, they might kiss girls or boys – or no one at all, because they’re too busy facing spies and spitfires, ghosts and goddesses.  But one thing’s for sure – they’re going to have a hell of a story to tell.” (This description is taken from the dust jacket flap)

ROBEN’S RAVE: Historical fiction is one of my favorite genres, so I was very excited when this book appeared on our New shelf!  It has something for everyone!  Like a little fantasy mixed in with your historical fiction?  Read “High Stakes” by Andrea Cremer where the fate of America hangs in the balance of a fight between supernaturals. Love Greek mythology? Be sure to read “El Destinos” by Lesley Walton where the story revolves around the three Gorgon sisters, controlling destiny from a ranchero in Southwest Texas. Want a good ghost story? Try “Gold in the Roots of the Grass” by Marissa Meyer. Ever been taken advantage of by a guy? Read “Pearls” by Beth Revis or “The Legendary Garrett Girls” by Y. S. Lee.  You can read just one or two stories or the whole book (like I did).  As with any short story collection, I found that some stories were better than others. But the ones I loved may not be the ones that YOU like.  That’s the great thing about short stories!  They are a true smorgasbord of literary delights. Just step up to the buffet.