The Wrath and the Dawn by Renee Ahdieh

Posted on December 19, 2016 by Audviral, Mistress of the Stacks 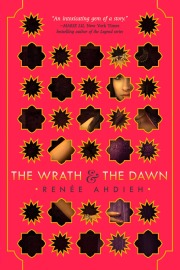 The Wrath and the Dawn by Renee Andieh

About:  In this re-imagining of One Thousand and One Nights, Shahrzad plans to avenge the death of her dearest friend, Shiva,  by volunteering to marry the murderous boy-king of Khorasan, but discovers not all is as it seems within the palace.

Roben’s Thoughts: I really enjoyed this book!  Shahrzad (aka Shazi) lives in the kingdom of Khorasan which is ruled by a young king or Caliph. It is well known among the people that the Caliph (Khalid) has had a rough time of it. But everyone is dismayed when he starts demanding young girls from his kingdom to be his bride and then he murders them after they have spent one night in his palace. Shazi’s best friend, Shiva, falls victim to this terror and so, in a desperate act to take revenge on her friend’s life, Shazi volunteers to be the 72nd bride. After their “wedding” – Shazi tells Khalid a story but refuses to finish it. Intrigued, Khalid spares her life. But something happens that Shazi had not planned on – she finds herself falling in love with the mysterious Khalid and he falls in love with her. Besides One Thousand and One Nights, the story also has elements from the fairy tale BlueBeard – a story Shazi relates to Khalid in order to make a point. Khalid has many secrets that he is keeping from Shazi and she needs to know what those secrets are in order to understand what motivates the young Caliph.
The story is told mostly from Shazi’s point of view but we also hear from Tariq, Shazi’s childhood friend and sweetheart who is hell bent on rescuing her. And from her Baba – her father – who has decided that the only way to free his daughter and exact revenge is to unleash the power of blood magic. Oh – and there’s a magic carpet, too. And a treasonous plot to overthrow the throne.
I liked Shazi a lot, and her handmaiden, Despina. Shazi makes it clear that she is no possession, not something to be sent away or kept locked up. She is her own girl – quite outspoken. Tariq is a bit of an idiot. And Khalid needs to be developed more – he’s a bit too… tortured? Lots of romance; a little blood and gore… Also there is a lovely glossary at the back of the book so that readers can keep up with the terms that Ahdieh uses. I initially assumed that the kingdom of Khorasan was a fictional kingdom, though references are made to Baghdad and Thebes. But it is, in fact quite real. It existed a long time ago (in the same area as Persia or present day Iran). So this is actually a bit of an historical fantasy with fairy tale overtones? Oh – and magic! Lots of magic…  Plus – if you like the story, there’s a second book already published and a third book in the works!

Teen Services Librarian for the Rita & Truett Smith Public Library of Wylie, Texas.
View all posts by Audviral, Mistress of the Stacks →
This entry was posted in adventure, magic, retelling, Roben, romance and tagged Renee Andieh, Smith Public Library, The Wrath and the Dawn, Wylie TX. Bookmark the permalink.